Skip to content
WALK-IN Accepted. 😷 Mask is required to enter into our facility.

Rediscover The Color of Life. TMS Therapy for Depression 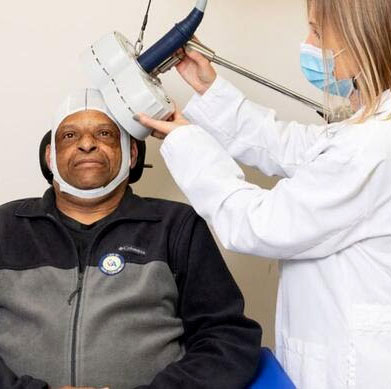 After TMS treatment, 65.3% of Veterans with co-morbid PTSD and MDD demonstrated clinically meaningful reducation.
In the largest study of its kind to date, medical researchers with the U.S. Department of Veterans Affairs (VA) supports the effectiveness and safety of transcranial magnetic stimulation for veterans with MDD and PTSD using standard clinical approaches.
As published in the Journal of Affective Disorders, “of the 770 who received at least one session, TMS was associated with clinically meaningful (Cohen’s d>1.0) and statistically significant (all p<.001) reductions in MDD and PTSD. Of the 340 veterans who received an adequate dose, MDD response and remission rates were 41.4% and 20%, respectively. In veterans with co-morbid PTSD, 65.3% demonstrated clinically meaningful reduction and 46.1% no longer met PTSD threshold criteria after TMS. Side effects were consistent with the known safety profile of TMS. VA researchers studied its effectiveness in 770 U.S. military veterans who had been diagnosed with a major depressive disorder–68% also had post-traumatic stress disorder.”

What Do You Want from Your Depression Treatment?

Covered by Most Insurance Providers

How Does It Work?

In depressed patients, the electrical activity in certain areas of the brain is shown to be reduced.
Using TMS targeted at these areas, we aim to re-awaken these cells, increasing brain activity to normal levels.
TMS uses a focused electromagnet to rapidly pulse a magnetic field to the targeted area. The magnetic pulses induce an electrical current in the brain, stimulating the cells into activity.

What is The Difference Between TMS and Antidepressants?

TMS is typically prescribed when antidepressants have failed, or the side effects are intolerable.
Antidepressants are systemic, which means that the medication is absorbed into the blood stream. This can cause numerous side effects. TMS is a non-invasive, outpatient procedure with no systemic side effects.

TMS and Electroconvulsive Therapy (ECT) are both effective in the treatment of depression, but ECT is associated with more side effects and is significantly more intense.
ECT is performed in a hospital and you must be anesthetized and restrained during the procedure. ECT works by applying a brief electrical pulse to the brain that medically induces a seizure.

Comparing Depression Treatments and Side Effects

TMS is a safe and well-tolerated treatment with very few side effects. Clinical studies show that the most common side effects are mild to moderate scalp discomfort and mild headaches, both of which are short term

Is TMS an Option for Me?

In the US, TMS therapy is appropriate for adults with Major Depressive Disorder (MDD), who have failed to achieve satisfactory improvement from prior antidepressant medication in the current episode
This means that if you have been diagnosed with MDD and medications are not working, or the side effects are intolerable, you should ask your doctor about TMS.

TMS is performed in a doctor’s office or clinic. Treatment sessions last less than 45 minutes and are typically performed 5 days per week, over a six-week period.
You will be seated in a comfortable chair, some measurements may be taken and you may be provided with earplugs.
Your doctor will position the magnetic coil on your head and treatment will begin. You may feel a moderate tapping on your head under the treatment coil and you will remain awake and alert throughout treatment.
Following your session, you will be able to drive home and you can resume normal activities for the rest of the day.

If you have depression but have had no progress with talk therapy, your medication is not working or the side effects are intolerable; you may have what is known as treatment-resistant depression.
Two proven alternatives are available, Transcranial Magnetic Stimulation (TMS) and Electroconvulsive therapy (ECT).
Both are effective in the treatment of depression, but there are numerous differences in safety and treatment tolerance.
Living with depression is hard, but Major Depressive Disorder (MDD) can be especially painful when one treatment after another doesn’t help. You lose hope. Will you ever feel better?
Finding the right treatment can take time but TMS may be the treatment that will make you feel like you again.

The staff is friendly and helpful. The run within 15 minutes of the scheduled appointment time. The Doctor and the staff go out of their way to ensure that your needs are met. I am very happy with our experience here .
Faye FultonHappy Client
Conventional treatments meet with modern psychological advances at Advanced Psychiatry Inc. They helped me to know myself better and get rid of the problems I have been facing.
A. L.Happy Client
Doctor took his time with you listen to you talk to you talk to your child watch what your child was doing the staff was warm and welcoming for my first visit I thought it was a great place.
William ThompsonHappy Client
Previous
Next

TMS Is Non-Invasive and Has Very Few Side Effects.

Please book an appointment to experience the benefits of TMS at Advanced Psychiatry Inc today.
Make an Appointment